Took a one-night class on letterpress at MCBA recently. There were about 10 people in the group. Ruby, the instructor, had us start by making exquisite corpse poems based on the loose theme of “circus”. We picked the best two, divided into teams, and got assigned words to pick out letters for from the trays.

There was a group of young designers from a local agency there together who did a lot of fine-tuning of the letters and layout, which was fine by me. I was content to touch all the things and ask questions about how the press worked and is maintained. (Mostly a lot of scrubbing and WD-40.)

By far the most satisfying thing is when the rollers are re-engaged after applying ink and watching it smooth out and blend together. Downright hypnotizing. I wish I’d gotten video of it. Actually rolling the print is fairly magical itself, though.

I’m considering adjusting my schedule in June to take the one-week intro class. I found letterpress to be more interesting and satisfying (and less fussy) than screenprinting, and it suits my skillset a bit better anyway. 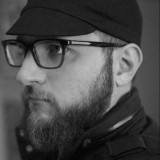